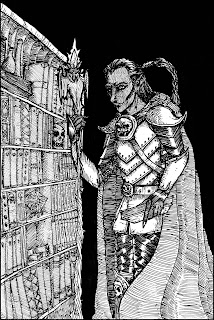 Here's a sneak peek at the art and text of the next mini adventure in issue #15...

Standing before one of them is MOR ORTHOR, the target of your quest. He stands close to two metres tall and is clothed in tight-fitting black leather. Sparking yellow eyes stare at you from out of a dark, gaunt face. A purple cloak hangs from his shoulders and he carries a long staff topped with a glittering crystal.

This is Lords of Stone, the Fighting Fantasy mini adventure, written and illustrated by Brett Schofield.

A terrible evil is growing deep beneath the Iron Hills!
Mor Orthor, a wicked Dark Elf sorcerer, is experimenting with the four elemental powers of earth, air, fire and water. Once he has mastered them all he will become unstoppable. The good Dwarfs of nearby Stonebridge have called upon your help once more. YOU must venture into the Iron Hills - armed only with your trusty sword and a handful of powerful Elemental Runestones - and put an end to the sorcerer before his vile experiments are let loose on the world! 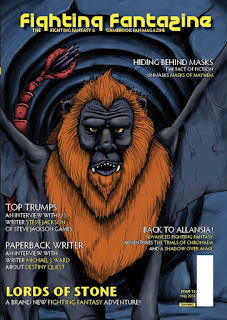 It has taken a while, but the time is nearly here for the release of the next issue of Fighting Fantazine. To tide you all over till it is released, here is the cover. Cover art by Brett Schofield!
Alex
Comments 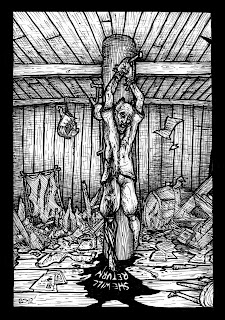 Here's a sneak peek from the art and text of the mini adventure for issue #9.

Even worse is what you see on the floor in front of him. A final message, written by repeatedly dipping the tip of his right foot in the blood that has puddled on the floor beneath him. Though smudged and smeared, the letters are still clear enough to make out, spelling out the dread warning, ‘SHE WILL RETURN’...

This is Return to the Icefinger Mountains by Ed Jolley and illustrated by Brett Schofield:

Thirty years ago the Snow Witch was preparing to unleash an ice age upon Titan when her plans were thwarted by a wandering adventurer. YOU were one of the slaves freed in the wake of her defeat, and have lived a quiet life since then. But when the horrors of your past start to catch up with you again, you must go back to the caves from which you escaped. Can the Snow Witch really be returning? And if so, do you have what it takes to stop her? 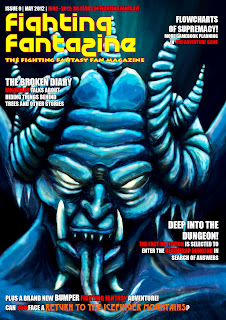 Here's the cover for the next issue, done by the talented Brett Schofield. Brett is also doing the interior artwork for the mini adventure this issue, Ed Jolley's Return to the Icefinger Mountains. As you can see from the cover there are other items of interest within the pages of the issue, but I'll cover the contents properly in a later post.
Alex
Comments 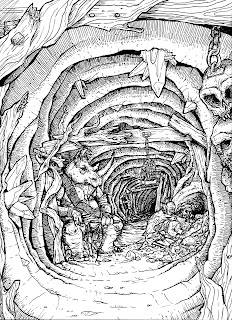