A reminder folks that the deadline for the AFF competition draws closer.

Get your entries in!
Alex
Comments

The Return of Advanced Fighting Fantasy

The new version of Advanced Fighting Fantasy is now available for purchase:

along with reprints of Out of the Pit and Titan:

Author Graham Bottley was interviewed in issue #5 and issue #6 features a competition to win copies of the above three titles.

Some recent posts about the return of AFF:

Reviews of all three books will appear in issue #7 of the magazine later in the year.
Alex
Comments (2)

Reproducing here the rules for the competition featured in issue #6:

To be in to win them, YOUR mission is to pen an original, entertaining, and imaginative short multi-player adventure using the original AFF rules as outlined in Dungeoneer, Blacksand! and Allansia.

Author of the new AFF series Graham Bottley will be judging the entries and picking the winner, who will not only be given copies of the new books, but have their adventure published in a future issue of this magazine for all to play and enjoy.

Please email your entries along with your postal contact details (using the subject line “AFF Competition Entry”) to: 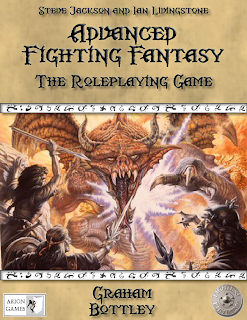 Coming in issue #6 is a competition based around the Advanced Fighting Fantasy (AFF) role-playing system (which gets relaunched next month from Arion Games and Cubicle 7 Entertainment). You will be asked to design an AFF mini adventure (exact requirements for the competition are listed in the forthcoming issue) that will be printed in a later issue of the magazine. Plus, there are some further goodies up for grabs for the winner!