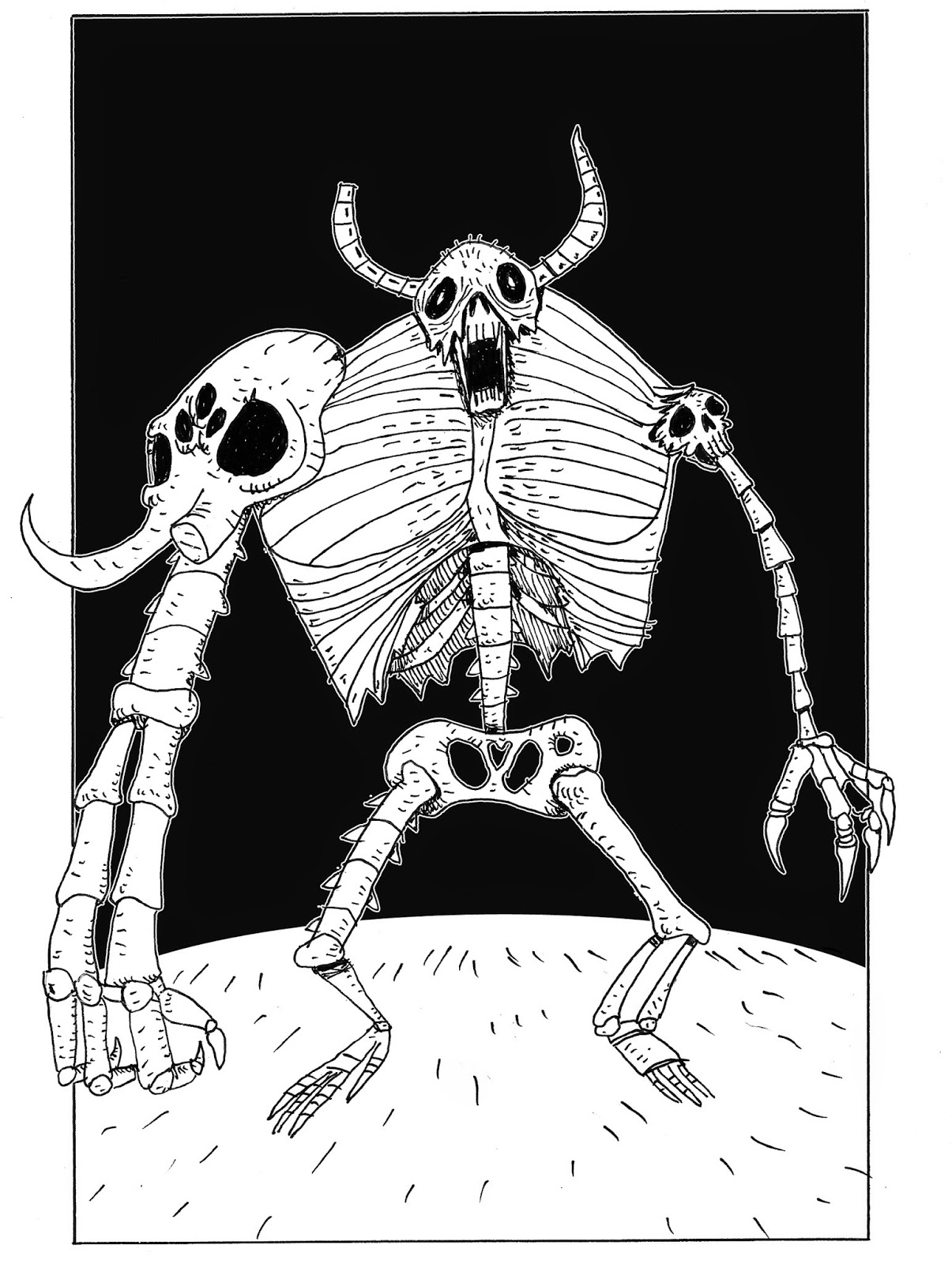 Here's a sneak peek at the art and text of the next mini adventure in issue #14...

Stalking out of the darkness comes a shambling skeletal creature, the bones of which are bound in strips of leather embalmed with noxious-smelling oils. It is almost seven feet tall and though unarmed, its bony fingers are like the talons of an immense bird. It opens its mouth in a taunt to you, though no sounds emanate from between its fleshless jaws.

This is Dreams of Darkness, the Lone Wolf mini adventure, by S.P. Osborne and illustrated by Robertson Sondoh, Jr.

Years ago you were found wandering the plains of Palmyrion, all of your memories gone. Taken in by Baron Coryene, you became his retainer. Recently, however, you have been experiencing disturbing dreams of a face with red eyes hidden by a black helm. Your prayers are going unheeded, even as your country is attacked by the armies of Eldenoran usurper Prince Lutha. What is the meaning of these Dreams of Darkness? And can unlocking their secrets allow you to remember your forgotten past?

The Geography of Kharé - Sneak Peek

One of the most iconic Fighting Fantasy locations of all, Port Blacksand in northwest Allansia, was featured in numerous Fighting Fantasy gamebooks and novels, and was described and mapped in detail in Titan – The Fighting Fantasy World and also in the original Advanced Fighting Fantasy series. This is in stark contrast to another emblematic Fighting Fantasy city, which was described in only one book and which was never mapped in the original Puffin publications of the franchise – Kharé, Cityport of Traps in Kakhabad in the Old World.
First visited in the second volume of the Sorcery! series, Fighting Fantasy never returned to this vermin-infested settlement (other than in new role-playing versions of the same adventure), and a map of it never appeared in any gamebook or in Titan. However, there is a mass of information regarding the layout of the city in the Sorcery! series and there are some interesting hints on one particular area in the full-colour illustration of the city in Titan. Furthermore, two very different maps of the city have appeared more recently, in the Myriador d20 module Kharé – Cityport of Traps and in the new Advanced Fighting Fantasy campaign Crown of Kings by Arion Games. What can we learn about the geography of Kharé from these sources and are there any problems with reconciling all the various pieces of evidence in trying to come up with a definitive picture of the layout of the city? That’s what this article aims to find out, so join us as we return to explore Fighting Fantasy’s enigmatic heart of darkness – travellers beware!
Alex
Comments 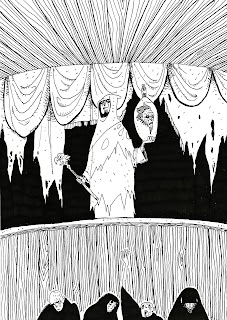 Here's a sneak peek from the art and text of the mini adventure for issue #9.

Upon the stage sits a man in black robes on a wicker chair, a tarnished sceptre clutched on his left hand. Head resting on a wrinkled hand he listens to the pleas of his subjects gathered before him and occasionally turns to ask for advice from the creature resting upon the wooden table next to him; a spirit trapped within a bottle...

This is Hand of Fate by Kieran Coghlan (who wrote Prey of the Hunter in issue #3) and illustrated by Robertson Sondoh Jr., a newcomer to our stable of artists. We look forward to more of his efforts in the future!

Things are not going well for the slayer of Balthus Dire. Not only have you lost your left hand, but the widow of your former enemy has joined forces with the High Priestess of Vatos to unleash the power of the Juggernaut, an unstoppable automaton that will bring chaos and destruction to all of Allansia. Luckily, you are not alone on your mission to stop them. Not so luckily, your companion is a being every bit as evil as those you seek to stop: a Ganjee!